Ashbourne RFC U12 followed the lead shown by the senior 1st and 2nd teams at the weekend with great performances away from home. The U12s  travelled to Old Belvedere on Sunday morning to play 4 games. The squad was back to full strength and won 2 games ,drew one and lost one playing some great passing and running rugby and all the lads tackling hard.

The squad is pictured except for Patrick Moran and Niall O’Sullivan who, after playing great games, dashed off to Navan to watch the “Mores” qualify for the Meath SFC Final (if you look closely at the picture you can see them in the background). Next up are games against Skerries at home on Sunday,in the meantime training on Wednesday evening at 7pm.All newcomers welcome. 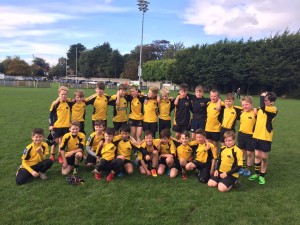