Ashbourne Take the Spoils in local Derby, and the McGowan Cup

A trip up the road to Boyne RFC was a game that both sides were looking forward. Local derbies are always relished and this was one Ashbourne had some trepidation about as Boyne have discovered some good league form off late. But Ashbourne won out well on the day with a comprehensive 35 points to 8 points win and in turn also picked up the NE Area McGowan Cup for their troubles, the second piece of silver this season so far.

Played in good weather and on a soft pitch, from the off the game was played at a high tempo with Ashbourne playing well from the kick off. Mahon was filling in the unusual position of prop but it did not weaken a dominant scrum. The backrow of McKeon, Wall and Deevy were working hard and Rooney in the center was putting in big hits. And it was Rooney who got Ashbourne going with a try. From a lineout in the Boyne 22, McCaghy found McKeon and playing a penalty advantage he broke forward and set up a ruck. Bass recycled the ball to Crotty and on to Rooney who was tackled. Wall picked and passed to Deevy who was stopped he popped the ball to Rooney who broke a few tackles to score. Crotty converted and Ashbourne took a 7 to nil lead.

Boyne tried to get their game going but Ashbourne were resolute and firm in all aspects. Boyne did get a penalty after 20 minutes but found it hard to make headway and they were caught out when they broke the golden rule in sport and never turn you back on the ball. Ashbourne had work their way into the Boyne 22 and when they were award a penalty the Boyne turned to form up on their line an din the meantime Deevy tapped and got in for a score. With Crotty’s conversion Ashbourne lead by 14 points to 3.

Ashbourne were scoring again 5 minutes later when O’Brien was put into space in his own half by McKeon and cut through the Boyne line to score from 55 meters out, which Crotty duly converted. Boyne did score next when the worked the ball into the Ashbourne 22 and outflanked the defense to score and unconverted try in the left corner. At halftime it was 21 points to 8 score line in favour of Ashbourne. There was still work to be done. The first score in the second half would determine the game.

Boyne came at Ashbourne with all they had got and it was hard work to keep them at bay. The Ashbourne defense has been strong all season and they were up to the task. Behan and Wall were introduced in the front row and Boyne was struggling in the set piece now. In the 59th minute Ashbourne reaped the benefit when Deevy notch up his second try when Ashbourne pushed over from a 5-meter scrum. The 4th try secured Ashbourne the McGowan Cup as they just needed a point to take the cup.

Ashbourne were dominant at this point and the game was won. Ashbourne added a 5th try when Deevy broke the cover and put Rooney in for his second try. Crotty converted to give himself a 100% record from the kicking tee.

Ashbourne still lead the division by 3 points as they head into a down week, with 2 rounds left. The next league match is at home to Wicklow on the 3rd of March. 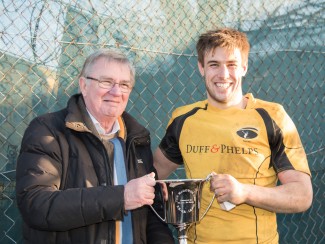