Ashbourne took the Leinster League title for the 2nd time in 3 years with a 26 point to 10 win over 3rd placed Bective. Gorey also bet second placed Suttonians so once the bonus point try was scored yesterday, Ashbourne ha date league a they could not be caught.

Tries from Justin Whittaker, Shane Bass, Jack O’Brien and a penalty try plus 3 conversions from captain Gavin Kennedy saw the team home, in one of their nest performances of the season.

The trophy will be presented on the 9th of February, when we host Seapoint in our last home league game. There is one more after that away to Gorey the following week.

The AIL round robin will be at the end of March with two home games to the Ulster and Connacht champions, while we will visit the Munster winners, and possibly Kilfeacle in that one.

Well done to entire squad and the coaching team but most of all the 2nd XV squad whop have support the 1st team all season.

They had also great win yesterday when they also beat Bective by 25 points to 20 with tries from Conor Malone, Eugene Gallagher, Conor Creaby and Tim Lawrence, with Cathal Field added a conversion and a penalty. Great stuff lads and the applauded Bective who had one the league at their presentation after the game. 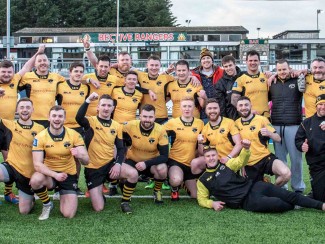