Ashbourne RFC U12 squad have been training hard since late August and recently played UL Bohs and Enniscorthy at the Rugby Campout.

On Sunday the squad divided into 2 teams for the Blackrock U 12s blitz at Stradbrook with 6 games for each team against Bective, Malahide, Wanderers, DLSP, Terenure, Blackrock, Cork Con, Lansdowne, Clontarf and St Marys.

The two teams played 12 games producing some great running rugby winning games, drawing games and the few that were lost were only by a try or two. The highlight was the last game against a previously unbeaten St Mary’s team when Ashbourne scored a last minute winner to ensure that the Ashbourne squad was placed 3rd in the overall competition based on the results, attitude, behaviour and appearance of the lads. Well done to all the 20 lads who played every minute of each game and the fantastic support from parents. It was a great way for Josh from Spain to finish his stay in Ireland and the lads look forward to seeing him in the future.

The squad will be bolstered next week by the return of Niall O’Sullivan Robert McLaughlin, Darragh Monahan, Harry Gormley, Michael McIvor, Enda O’Brien and Robert O’Farrell.

U12s train under lights on Wednesday at 7pm with games or training each Sunday in either the Metro or North East League. 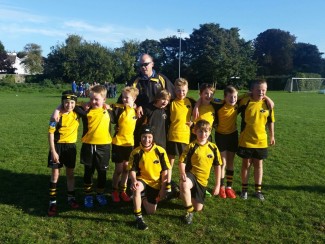