Ashbourne Get Back to Winning Ways

It has taken till round 4 of the Leinster League Division 1A for Ashbourne clock up their first league win but on Saturday at Sydney Parade the took the spoils in hard fought but well deserved win. You don’t become a bad side overnight and the core of this team have been around for a few seasons so it is no surprise that they have broken the duck for the season.

The pack is still match winners with McCaghy, Behan, Deevy, Roche and Jake and Alan Wall there from last season. On Saturday Kent, Keegan Keith Kennedy and Hurley all brought a lot to the table with an impressive performance. Augmented by a backline where captain Gavin Kennedy is the senior, starting shown what they can do, and the performance was the best of the season.

Monkstown introduced James Downey, former Munster, Northampton and Wasps player into their backline for his debut and this was seen as a big boost for the home side. But from the off Ashbourne were setting the pace and had the momentum. From the first scrum it could be seen that this was going to be a big weapon for Ashbourne with Monkstown going backwards in set piece. Lineouts were 50:50 but Ashbourne were holding their own.

Much of the early game was played between the 22’s and it was no surprise that when Ashbourne broke through it came of the back of the Ashbourne scrum. The visitors had been turning p the heat and a long kick in the 16th minute saw wing O’Neill in pursuit only to beaten to the touch down by the covering fullback. From the restart, Simon Deevy fielded in midfield and ran back at the up rushing defense. He was brought to ground but recycled the ball. Kennedy cleared the ball to McCaghy whose pass found Jake Wall. Monkstown knocked on his grubber kick, and Ashbourne had a scrum deep in the left corner and were defending their line. From put in Ashbourne drove forward and Deevy kept the ball his feet as they inched forward, but he pick the ball when the scrum was stopped illegally. Playing advantage he got the ball to Kennedy who broke right and found Martin coming at a great angle to break the covering tackle and score. Kennedy was just off with the conversion.

Following a great break that involved O’Brien and O’Neill the Ashbourne were awarded a penalty in the same bottom left corner, also resulting in a home side yellow card. The rain was pouring down but it was not having an effect on the game. Ashbourne set up the line out and from the drive forward they were awarded another penalty but took the scrum. From the put in the power went on with Behan, McCaghy and Keegan leading the way in the front row, and the pack drove over the line for Deevy to touch the ball down. Kennedy added the two points and Ashbourne took the 15 points to nil lead into the break. Ciaran Roche who was having a great game went off with a knock to be replaced by Keith Kennedy with Kent moving into the second row.

It was Monkstown, as expected, put on the pressure from the restart and within 5 minutes and scored an unconverted try. A good break from on of their backs and some missed tackles saw him score a great try, but as much as they huff and puffed they made no real serious inroads to a resolute Ashbourne team. Players like Jake Wall, Conor Hurley and Adam Martin were having exceptional games while Keith Kennedy did his job really well when he came on. Mitchel O’Meara and Matt Connolly add a lot of pace to the backline and their covering along with O’Neill was excellent. There were two cards in the half with Sean Kent seeing yellow in the 29 minute while a home player followed him off 5 minutes later.

Gavin Kennedy had two misses from the tie in the half but did get one to stretch the lead to 18 to 5 and Ashbourne saw out the game to their delight. A well deserved win and hopefully this will kick start the season.

That said it is local neighbours Dundalk next Saturday and that will be a very big ask.

Ashbourne 2nd XV also had a great win against Monkstown as the curtain raiser running out winners by a score of 17 points to 6. Tries from Shane McNulty and Eugene Gallagher while 2 conversions and a penalty were added by Eddie Conaty. 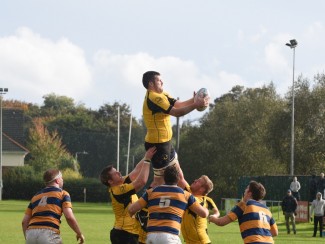