Ashbourne Advance to 2nd Round of All Ireland Junior Cup

Ashbourne ran out comfortable winners by a score of 28 points to 10 under the shadow of Croagh Patrick on in Westport on Saturday. In fact it was a bit of déjà vu as this this last year Ashbourne went to the same venue, against the same opposition, on the same weekend, with the same referee, the same total points scored and the only difference was the score line (9 -29). In advance to the second round the similarities end as Ashbourne have drawn a home tie against Munster side Bandon on the 12th of November. Halloween came early – spooky!

This is the 3rd win on the bounce and certainly re-enforces the fact that Ashbourne start the season slowly. But in this game they were quick out of the blocks and were seven points to the good after 2 minutes. Martin kicked off for Ashbourne and went deep. Westport tried to work the ball out and when they put in through the hands in their own 22 Spooner’s pressure caused the ball to be dropped and he hacked it on. Jake Wall gathered and set up the ruck. Kennedy recycled to Keegan who was stopped and Kennedy recycled again to Spooner who put Connolly through to round the backline and score near the post. Kennedy added the 2 points.

Westport settled down and start to take the ball on through their big pack but matters were not helped when their 8 was sent to the bin for a bit of over exuberance at the tackle. Ashbourne made little use of this advantage as the home side dug deep. Westport showed good touches while Ashbourne through Martin, Connolly, O’Brien and Spooner moved the ball well. The pack held their own with Deevy playing his usually game but Wall and Kent were more than capable of making major contributions. But all was even-steven throughout the half. On the stroke of halftime Westport missed a penalty, which was their best chance of the half and we went into the break with Ashbourne 7 nil ahead.

The second half stated the same way with an Ashbourne try within 5 minutes. From a line out on Westport 10 meter line on the left Norton found Hurley and Kennedy set the backline in motion with a quick long pass to Martin. He found Spooner and passed on to Deevy on his right shoulder. He made his way deep into the 22 and when stopped Kennedy was on hand to receive a pop pass from Deevy and he put Martin into space. He was stopped short of the line with O’Brien rucking over him. Wall picked and drove over the line for the try. Kennedy added the conversion and Ashbourne were a bit more comfortable at 14 point to nil ahead.

Within 10 minutes Des Spooner added the third try. In fairness all the game was being played in the Westport half. Connolly, Spooner, Kennedy and Wall were all involved in the build up and finally pass out left to Spooner to score was the result of constant pressure. Kennedy made it 3 out 3 with the conversion. Ashbourne started unloading the bench with McCaghy and Keith Kennedy coming on for Behan and Norton while Wall made way for Mahon.

The fourth try arrived soon after. Westport had a line out in their 22 but Hurley got up to disrupted the ball as it went back on their side. As they attempted to kick clear McCaghy and Keith Kennedy combined to deflect the ball back to Deevy who drove, spun and weaved his way over the line. Captain Gavin Kennedy made a 100% day from the boot with the conversion and Ashbourne led 28 points to nil.

Ashbourne introduced Martin Gallagher and Paul O’Neill, both getting their first run out with 1st team and in fairness to home side they never gave up. They were rewarded with two late consolation tries but the game was well and truly over as a contest. The final score was a win to Ashbourne by 28 points to 10 and now move onto the 2nd round on the 12th of November against Bandon. 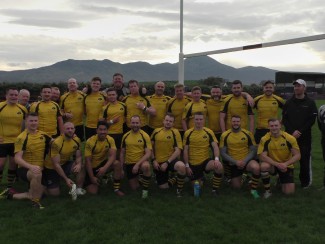